A Wonder of Modern Human Achievement: The Panama Canal A Wonder of Modern Human Achievement: The Panama Canal

One the "Seven Cruise Wonders of the World," the Panama Canal is truly a modern marvel. Consider how long it used to take someone or something to go from New York to San Francisco and you can really appreciate the necessity of this engineering triumph. Yet since, it was completed in the early 20th century, there aren't many alive who can remember a world without this vital shipping artery. If you haven't yet experienced a voyage through the canal, we highly recommend it.

The Panama Canal, completed in 1914, stretches 50 miles across the narrowest point of the isthmus between the Caribbean Sea and the Pacific Ocean (because Panama is oriented east-west, the canal runs north-south). There are currently two bridges that “connect” North and South America by crossing the canal.  The Bridge of the Americas was built in 1962 and served as the main route for the Pan-American Highway until the Centennial Bridge was completed in 2004. The Atlantic Bridge is currently under construction near the city of Colon and is expected to be complete in mid-2018.  The Atlantic Bridge will be the longest concrete cable-stayed bridge in the world. 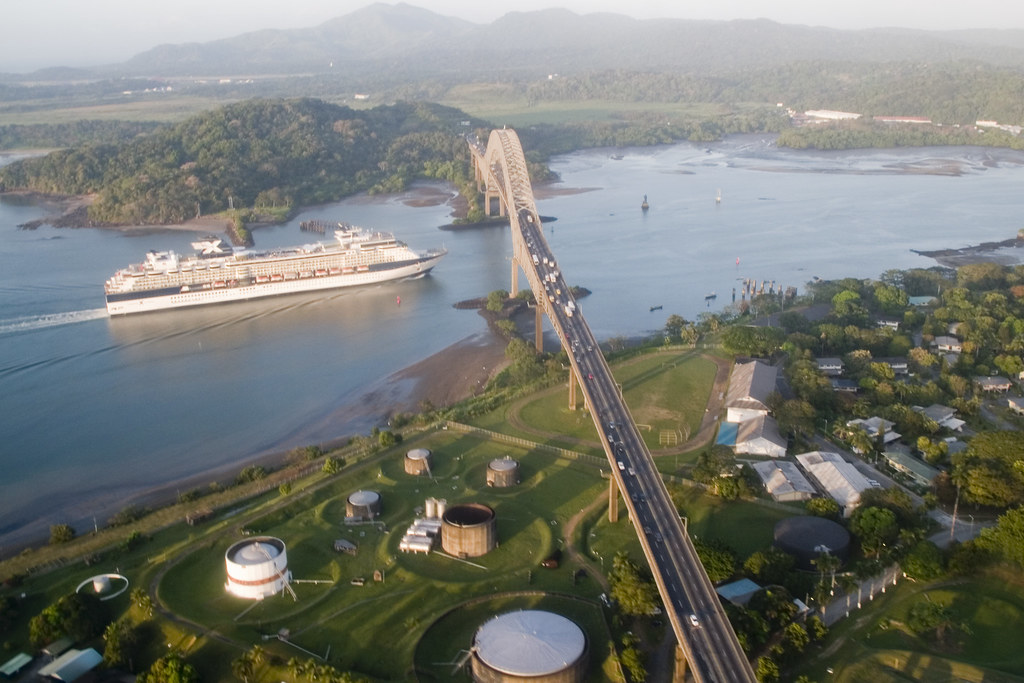 You can see the Panama Canal from land, but we recommend making a trip through the waterway. Many people do so as part of a cruise-ship passage, but tour companies in Panama offer canal excursions on smaller boats, which give the best opportunities for seeing wildlife on the banks and of viewing the locks up close. No matter the size of the vessel, traversing the entire canal is an extraordinary experience. You'll probably want to stay on deck most of the time to observe the Panamanian countryside as well as to hear the bilingual canal guide describe the passage and recount the canal's fascinating history.

The most common way to enter the canal on a cruise ship is from the Caribbean, near the port of Colon. Ships coming from the Pacific enter the canal near the port of Balboa. Whichever side you enter, your ship will likely spend some time waiting in locks. At any one time, there may be as many as 50 ships waiting to transit, and several ships may be in transit in each direction at the same time; normally all transiting ships travel in one direction in the morning, while in the afternoon ships bound in the other direction transit. Each ship is steered through the canal by a pilot from the Panama Canal Authority. It's also interesting to watch the canal workers.

After passing through Gatun Locks, southbound ships enter man-made Gatun Lake, which covers more than 160 mi², making it one of the world's largest artificial lakes; it is also an integral part of the canal passage. Largely undeveloped, Gatun is rich in wildlife: As your ship sails around islands that were once hilltops, you're likely to see lots of birds. (Take good binoculars.) Crocodiles can sometimes be seen raising their snouts ever so slightly from the water. Ships cross all 24 mi of Gatun Lake to Gaillard Cut, a V-shaped channel that was carved from rock. This section of the canal through the Continental Divide was the most difficult to construct—it required excavating hundreds of millions of cubic yards/meters of rock and dirt.

Three separate lock systems (Gatun, on the Caribbean side; and Miraflores and Pedro Miguel, on the Pacific side) raise and lower ships 280 ft to the level of Gatun Lake and back again to sea level. Ships enter six chambers in all during their passage. Each chamber is 1,000 ft long and 100 ft wide and is paralleled by a twin lock (hence there are 12 chambers in all), permitting passage of two ships simultaneously. The chambers are filled and emptied by gravity, with 52 million gallons of fresh water being flushed out to sea with every ship's passage.

Most cruise ships pass through the canal during the day, when passengers can appreciate the natural beauty of the countryside and Gatun Lake. But a night crossing won't be disappointing: Lights reflecting in the water and the shadowy shapes of other ships gliding by lend an eerie, almost dreamlike quality to the experience.

Contact us for more information and to reserve your Panama Canal cruise. Have a favorite memory of the Panama Canal experience? Post in the comments below.  We'd love to hear from you.

The Little Known Secret for Honeymooners and Anniversaries in Bora Bora