Budapest, the capital of Hungary, is a major highlight of the most popular river cruise itinerary, the Danube River. The city is a UNESCO World Heritage Site due to its history (it was once a Roman city named Aquincum) and architecture. Budapest is actually three cities that have been combined. Buda and Obuda lie on the western side of the Danube River, while Pest lies on the eastern side. Seven bridges connect the city across the river which once served as the northern frontier for the Roman Empire.

If you are going to enjoy a river cruise on the Danube, I highly recommend you plan to stay a few days in Budapest either before or after your cruise. You won’t regret it. In fact, I’ve put together a few highlights you should make sure you experience while in the “Pearl of the Danube.” Buda Castle was once a royal palace that dates back as far as the mid-13th century. The impressive structure now houses the Hungarian National Gallery and the Budapest History Museum. To get there, I recommend you ride the funicular up the steep slopes of Castle Hill (Várhegy) or you can take the bus. Even if you don’t actually go in the museums, the view from the top of Castle Hill is worth the trip. There are walking tours of the castle and surrounding areas available. Contact us if you’d like more information. Fisherman’s Bastion is one of the top Budapest attractions without a doubt. The lovely lookout towers of Fisherman’s Bastion were built in the 19th century to serve as a lookout tower for the best panoramic views in Hungary. The views from the terraces as well as the 7 turret towers are absolutely stunning. I highly recommend you bring your camera at sunset for the best photos of the Pest side, including the iconic Parliament building.

The Parliament building, a magnificent example of Neo-Gothic architecture (although displaying Renaissance and Baroque characters too), is just over 100 years old. The third-largest parliament building in the world, a visit to this iconic structure should definitely be on your list of things to do. Tours are available for when the National Assembly is not in session and can be booked in advance.  Inside you’ll be amazed with the stunning architecture of the old House of Lords, as well as, a view of the Hungarian Crown Jewels.  Be sure to prepare for some photos at night time as this building is stunningly lit at dark. 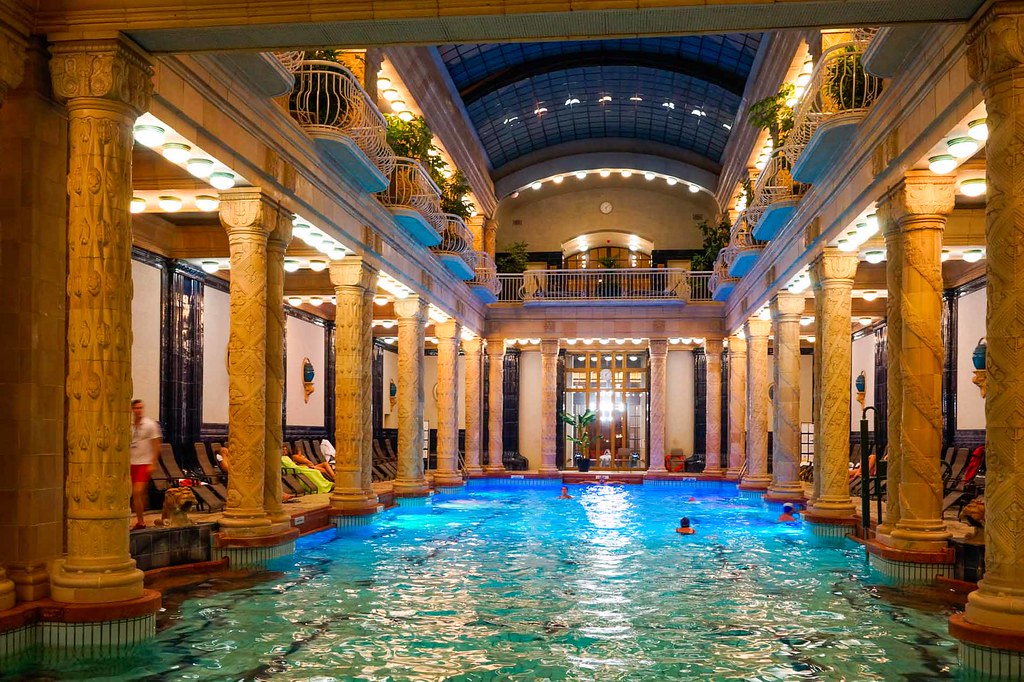 There are many popular thermal baths in Budapest. The water stays warm year-round and there are numerous options to choose from. My recommendation would be Gellért Baths because of its beautiful entry way and large pool, that in the summer is used as a wave pool. No visit to Budapest would be complete without taking a dip in one of the many thermal baths. Situated in the Boscolo Hotel, this café looks like something you might see in a Renaissance palace and makes its claim to fame as “the most beautiful coffee house in the world.” The menu here is varied while offering some local favorites like goulash, wiener schnitzel, or chicken paprikash.

These funky establishments are a rebirth of some of the more dilapidated buildings from the communist era that creative locals have decorated with a wide a varied décor. Enjoy a drink with a local and take in the eclectic atmosphere.

Reportedly the largest synagogue in Europe, the Jewish Museum within houses exhibits devoted to the large number of Jews who perished in the Holocaust. The synagogue lies in the Jewish Quarter, which was walled off during the German occupation in World War II. Today it is vibrant with culture, food, and art and has become “the mecca of cool.”

There's so much to see and do in the "Pearl of the Danube" that you're going to want to come back again and again. Budapest is a truly amazing place. I hope you get a chance to stay three and see it for yourself someday.

Have a favorite part of Budapest? Leave a comment below and let us know. Looking for more information or to plan your trip? Contact us here.