Experience the best of Cartagena, Colombia in a day Experience the Best of Cartagena, Colombia in a Day

Cartagena, Colombia is the undisputed queen of the Caribbean coast, a fairy-tale city of romance, legends and superbly preserved beauty where you are certain to fall in love with the people, the architecture, the history and the culture a city that brings “magical realism” to life.  Spend a day exploring the wonders of this city while travelling on your Panama Canal cruise or through a custom itinerary built by your travel agent. I've put together a list of the top must see attractions of this great city that can be seen in a day. Even if you're not an early riser, make an exception when you're in Cartagena. The sunlight at daybreak casts an enchanting spell over this sprawling city. The contrast between the imposing Fortress of San Felipe and the glass-and-steel high-rise hotels along the Bocagrande Peninsula presents a striking vision of the city. I would recommend you start at the Castillo de San Felipe de Barajas. (Get there as early as possible—the tropical sun beating down on this immense pile of rock can be staggering—use plenty of sunscreen—and keep in mind that cruise ship tour groups descend en masse by mid-morning.) The fort, which is northeast of the Old City, is one of the largest and strongest fortifications the Spanish ever built in the colonies. This impressive fortress, completed in 1657, is where Don Blas de Lezo (a one-eyed, one-armed, one-legged Spanish commander) and 2,500 men fought off 30,000 British soldiers in 1741. One may doubt at first that Cartagena, with its limited resources, could have defeated such a great British armada, but any doubts recede immediately after touring this massive and imposing edifice, with its vast, slanted walls and bulwarks accessed by long tunnels. Don't miss the statue of Blas—completed after he'd lost his limbs—that stands proudly in front of the fort. The Old City is nearly encircled by walls that stand 12 ft tall and are as thick as 60 ft in some places. Las murallas can be explored as well as admired—you can stroll atop the wall, which still forms a perimeter around three-quarters of the city. You should prioritize strolling through the narrow-shaded streets of the old walled city, where flowers cascade from overhanging wooden balconies. You'll find a photo opportunity at every corner. Peek into doorways to see the cool tiled patios hidden from other passersby. Make sure you explore Plaza de Bolivar, a lovely, leafy plaza that contains an impressive statue of the liberator himself on horseback. Also, don't miss Plaza de San Diego and Plaza de Santo Domingo. Be careful not to go too far, though—the southeastern part of the old city, called Getsemani is a cultural hub and a great place fro shopping and taking in local fare. La India Catalina is an iconic image of the city, the statue of La India Catalina, created by Spanish expatriate Eladio Gil and located on Venezuela Avenue, at the southeast apex of Las murallas. The life-size brass statue of a female nude atop a concrete pedestal is a monument to a native inhabitant of the bay region who served as an interpreter for the city's founder, Pedro de Heredia. The awards given in the Festival Internacional de Cine are statuettes of La India Catalina. Make sure you stop by the Palacio de la Inquisicion if you're up for a macabre history of one of Christianity's darkest periods. Located on the west side of Plaza de Bolivar, this 18th-century building is a fascinating place with a sordid history that belies its beautiful baroque doorway. Throughout the course of 200 years (1610-1811), the Inquisition tortured and burned accused heretics and witches. The fiendish instruments that persuaded them to confess are displayed downstairs in a small museum. Upstairs exhibits profile the history of the city. For your inner gold digger, be sure to check out the Museo de Oro. This impressive museum (a branch of the Museo del Oro in Bogota) preserves the magnificent gold artistry of the Zenu culture, which dates from the second century BC. The Zenus inhabited a large part of northern Colombia until the arrival of the Spaniards in the 1500s. The Old City's principal (but not its largest) plaza has at its heart a tree-shaded park with a life-size bronze statue of Simon Bolivar atop his horse. The plaza is surrounded by impressive buildings, including the Palacio de la Inquisicion, the Museo del Oro Zenu, the Cathedral de Santa Catalina, and on the east side, the town hall. The plaza was a principal setting for Gabriel Garcia Marquez's novel, Love in the Time of Cholera. 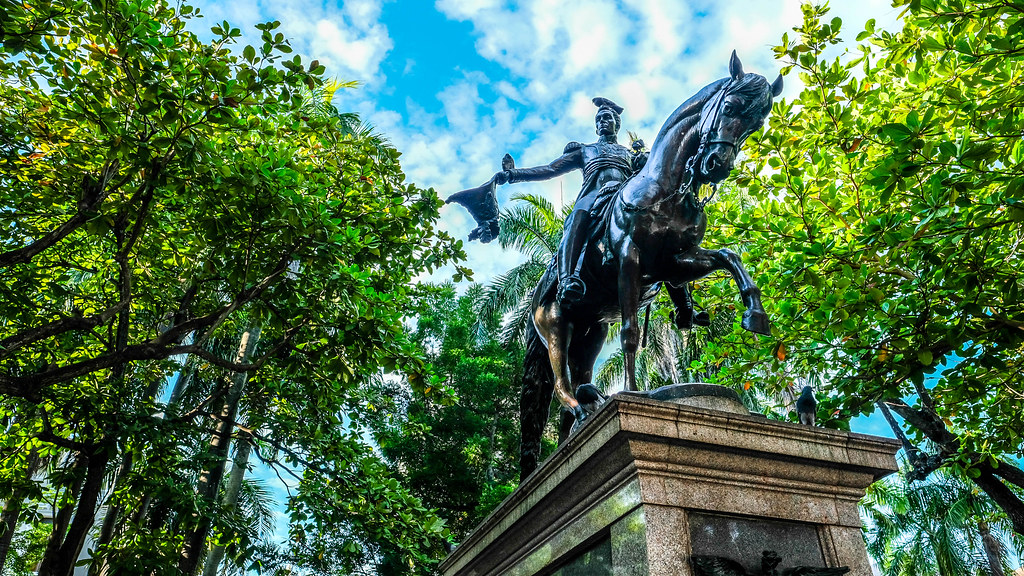 The Square of the Arcades, on the northeast tip of the old city, is lined with a row of former warehouses built against Las murallas. The arcades deep in the walls were designed as storage vaults, but were used as prison cells during the civil wars in the 19th century; at high tide, the unfortunate internees were up to their knees in seawater. Now the buildings house shops selling handicrafts. Among the more interesting craft shops are those in Plaza de las Bovedas, vaults tucked into the northeast corner of the Old City walls. This is a good place to bargain for the brightly colored hammocks of the Wayuu people, and for straw hats and baskets. If you're looking for great local fare, my recommendation is to pay a visit to El Santisimo. Located near Plaza de San Diego, this is one of our favorite restaurants in Cartagena. Its owner, Federico Vega, obtained his culinary education in London and at Le Cordon Bleu in Paris. He has succeeded in creating a calm, elegant atmosphere in one of Cartagena's most charming corners. The menu is extensive and unique, with a tongue-in-cheek ecclesiastical theme, although we prefer the contemporary front space to the colonial section, where tour groups are often hosted. The wine cellar is unmatched—so much so that Vega opened a wine bar called La Cava del Santisimo across the street.  Open for lunch and dinner Mon-Sat, major credit cards are accepted. You'll fall in love with this jewel of a city and cherish your memories of experiencing the culture, stepping back into history and savoring the delicious food in Cartagena.

Contact us for more information or to plan your vacation to Cartagena or your Panama Canal cruise​. Have a favorite memory of Cartagena? We'd love to hear from you.  Leave a comment with your favorite experience in this beautiful city.